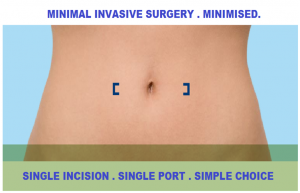 In SILS, the incision is typically placed at the patient’s umbilicus and so the scar is hidden and is closed with absorbable subcuticular sutures. This surgery is often known as “SCARLESS” surgery, as when the wound heals, it is almost invisible because it is hidden within the belly button. The healed incision leaves practically no scar, thus making SILS cosmetically a superior option.

Operations which can be performed with SILS

Currently, the following operations can be performed by SILS